My journey started in Avonmouth in 1988 whilst researching the relationship between wildlife and industry for a commission. There I saw four cormorants sitting on a rusted pier, drying their wings in the sun, a functional gesture suggesting a paradoxical attitude of submission and strength: triumph through vulnerability. 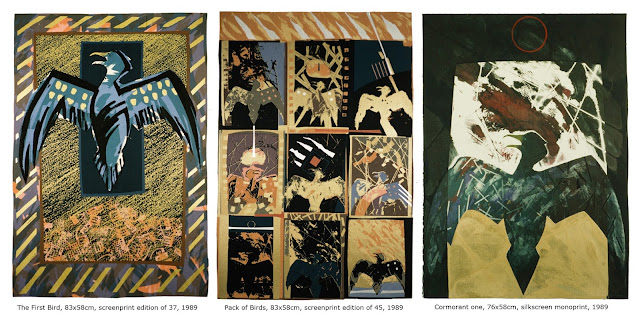 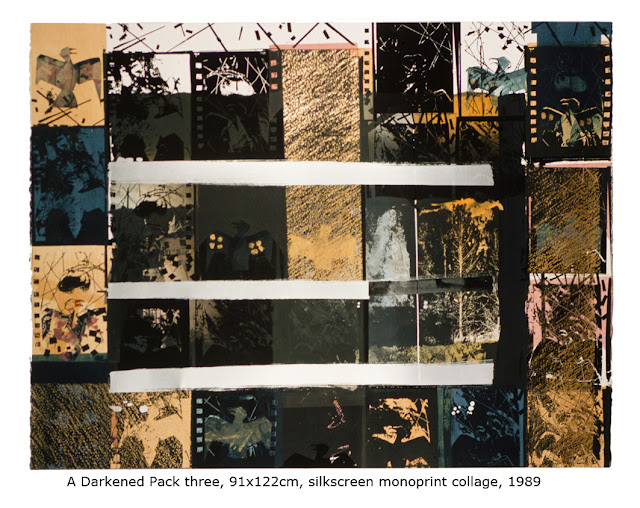 These birds were the focus of my 1989 exhibition ‘The Plight of the Bird’, signifying the start of an exploration centred on the development of a bird / bird-woman / feather: icons  adopted as facets of a personal symbol. Certain monoprints from ‘The Plight of the Bird’ accentuated contradictions inherent in their demeanour: pride, aggression, pathos and dignity. These works formed the introduction to a later exhibition shown at the Hot Bath Gallery, Bath, during April 1996,  ‘The Evolution of the Bird’.

This exhibition which developed over the interim 7 years was split into three sections:-

'The Last Birds' -  monoprint silkscreens printed onto heavy paper, had much of the detail silk screened separately on Japanese tissue which was subsequently collaged onto the base print. This change in surface texture and opportunity to physically distort the images allowed a mode of expression otherwise denied in conventional silkscreen printing. Imagewise these last birds were released from the recurring heraldic sequence which was central to the birds in the former exhibition 'The Plight of the Bird' ; they became skeletal as they disintegrated, falling apart as they confronted a transfiguring force and evolved into the Harpyia. 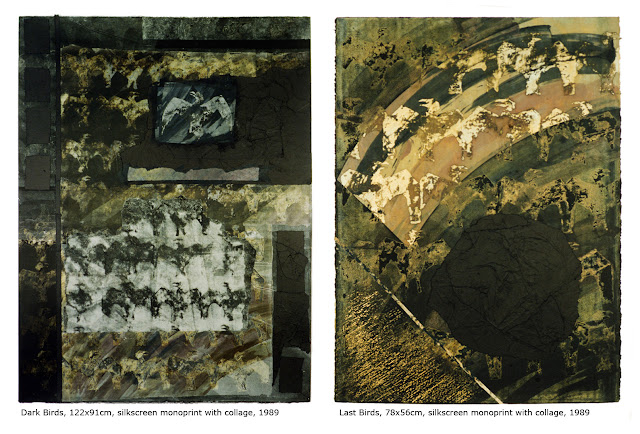 The Harpyia, the bird-women, were the snatchers and personifications of the storm-wind. In a moment of truth and metamorphosis, the  birds decomposed, leaving a core of raw femininity wherein rests  potency - which is not always alluring or polite.  These works tended to be smaller, using a variety of media including different forms of print, paper and selected objects. Some follow the format of ‘The Last Birds’, whilst the series ‘The Man Who Set the Harpy Free, What Will Become of Him Now?’ had a sculptural focus using heavily dyed paper, photocopy, etching, feathers and string. 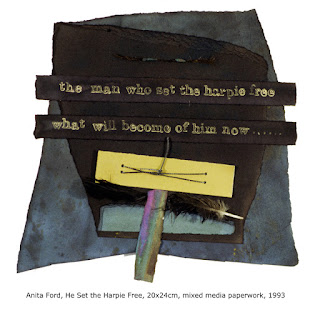 After the offer of the Hot Bath Gallery show I decided to start work on a third section, 'The Meditation'. This included the 'Phoenix' work, a series of dyed constructed paperworks which were intended to create a conclusion, but instead I found myself with an important starting point. The 'Phoenix' series of paperworks used the neck feathers of a male pheasant, which when tied into dark dyed creased paper had the quality of flames. The work generated a feeling of stillness, particularly when the feathers were used in a formal manner, and from there I started exploring different ways of transforming the feathers within the context of various paper surfaces eventually arriving at constructed paper / silkscreen works. 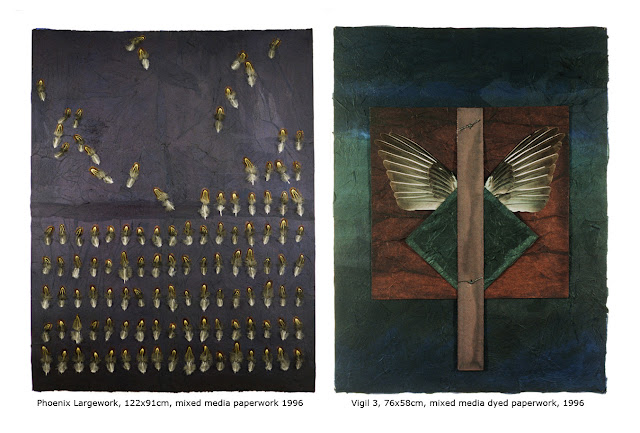 Posted by Anita Ford artworks at 23:03