Finally I’m starting my blog / retrospective / epitaph? No can’t say epitaph because I’m not dead and intend doing a lot more work before I reach that state.

This first blog is entitled 'Early work', by which I mean work achieved at Loughborough College of Art, Fine Art sculpture, and shown at my final show in 1969, and the initial years after that. I don’t know what happened to any of the sculpture, they probably ended up in a skip. I’m pleased I had the foresight to take some photographs though, because looking back, in my mature years, I’m not displeased with them. There are no titles to identify the works and most of the backup drawings have long since disappeared, but I can read in these sculptures the the beginnings of my journey. At art college I was enthusiastic about the Constructivists, Surrealists and Pol Bury, an improbable trio, but these influences made me  want to create the impossible in a cool fashion. Create a land of shifting forms where the tangible and intangible crossed, and do this with the use of reflections on polished metal and perspex and of course the use of light.

A few drawings have survived in a rather tatty state, and here I spot the beginnings of my love of paper in that the tonal qualities of the drawings were achieved by progressive layering of tracing paper. Even the drawings were constructed in a sculptural fashion, so it's bizarre that after leaving college I didn’t do another sculpture for 43 years.

A year later I was awarded the Italian State Scholarship (9 months in Venice) which was wasted extensively but had a great and memorable time. However something must have penetrated my subconscious other than wine because on my return found a focus, and I started working in a sustained manner on drawings and paintings, dark moody impossible landscapes, multiple sequential works which never quite became animations.

During this time, for 3 days a week, I was working for the Borough of Tower Hamlets, London as craft teacher in a day care centre (technically the title was Art Therapist, but let’s be honest here…….). The other 4 days were spent working on paintings and drawings in a bedsit in Kentish Town, the work getting bigger and the space getting smaller. I was also painstakingly painting blends and knew there had to be an easier and better way of doing it. I thought maybe silkscreen printing could be a possibility, and enrolled at the Camden Institute, NW5 (it’s now a French lycée) to learn the subject, was lucky to have a fantastic teacher, Ingrid Greenfield, who gave me the knowledge and free rein to become obsessed with and consumed by the process. Within 6 months I had taken all my holidays from my job and finally resigned in order to devote as much time as I could to screen printing.

The work on the right is my second silkscreen print (1974). I haven’t a record of the first which was simply a blended sphere on a blended background, which proved my instinct to be correct, screenprint was much better way of expressing my ideas. 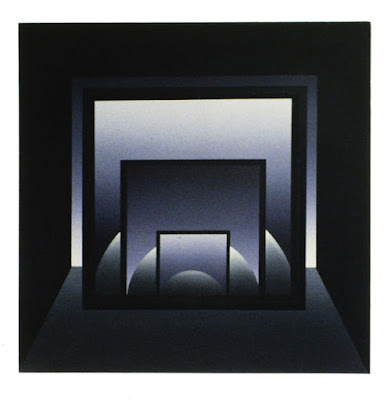