The Frozen Water Paperworks are a body of work first generated by concern (outrage?) over the nuclear tests being conducted by France at Moruroa atoll. I discovered that an atomic bomb dropped on a coral reef could turn the coral into glass.
The constructed paperworks  are cool, quiet, and time has stopped for an instant. The  edges of the paper have become  fissures edged with radiant turquoise blue greens of a Pacific atoll. The silver metallic surfaces echo bomb casing  -  hot  frozen water - shoals of silver fish  -  coral melted into glass and holding fragments of life, the feathers, as amber held vestiges of life during the last nuclear age when the earth was forming.  Nature is holding its breath, there is stillness, man is playing at God. 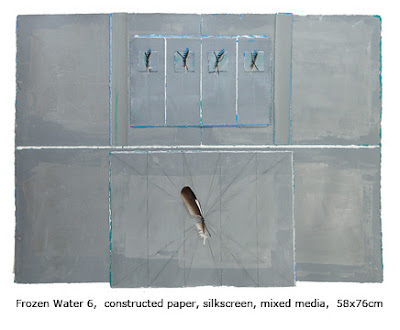 A series of constructed paperworks with silkscreen and mixed media of feathers and string. The feathers which I have previously used as a personal symbol of the bird and a metaphor of strength and vulnerability, have an added  emphasis in that they here represent nature, beauty and life. The feathers are revered icons of vitality, yet here they are sometimes crushed and restrained, sometimes weathered and tattered remains of a beauty that once was - and they are tied to the gun metal bomb metal silver slabs of paper. The metallic surfaces echo meltdown - coral melted into glass. Knotted string is visually echoing barbed wire (danger there is something happening here, come no further).

Posted by Anita Ford artworks at 23:13