This residency was organized by Art for Offices. The gallery was in Isetan Department Store in Shinjuku, Tokyo, and the occasion was British week. All over Tokyo stores were promoting all things British, and Isetan was presenting an exhibition of works from the Dulwich Collection along with a separate exhibition of Contemporary British Art. On the roof of the store they had a flock of sheep which were being herded by an English shepherdess with her Welsh sheepdog. Prince Philip came to visit, the store was closed while the entire staff bowed him in. My role was to demonstrate silkscreen printing and talk to the public about the exhibition and processes used in the contemporary show. I had an extraordinary time in Tokyo, whilst out of my comfort zone culturally, the staff of Isetan were very kind and forgiving of my etiquette slip ups, and very good friend, Kimiko, who I met whilst living in Verona, Italy, had subsequently returned to Tokyo and was my introduction to a more intimate view of Japan in that I was invited to stay in her family home for a few days after my residency had ended and before I began my travels of exploration of the country.

Japan of 1986 was so very different to my subsequent visit in 2008. At that time the Japanese were far less travelled in general, and a tall western woman staying at the home of Kimiko’s father (who wasn’t at all sure about the situation) was incredibly exciting for Kimiko’s young nephews who brought their friends home to look at the size of my feet. I don't think my feet are huge - I take a size 39. Their class at school was set an essay ‘What would you tell a foreigner about Japan if one came to stay at your house’. My stay gave them a mantle of coolness.

That period of time in Japan was visually so rich, and the visit to Hiroshima emotionally so heartbreaking, it’s not surprising that the experience would influence my work for a good deal of time. 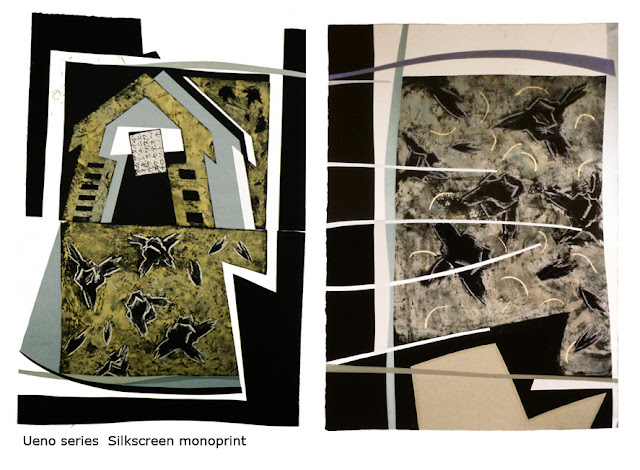 Posted by Anita Ford artworks at 21:56