In 1978 I had my first solo exhibition at Graffiti Gallery which at that time was located in Gt Marlborough St London W1. It was my first substantial exhibition which took a year to complete. By this time I had had one woman shows at Heals (there was a time when they had an art gallery), and at galleries in Southampton and Brighton, but these exhibitions showed work which already existed.

The mid 70s was the time of the NASA Viking Landings 1 and 2 (they actually landed in 1976) and they were sending back photos of the red planet, a rocky barren landscape holding a myriad of mysteries. As a child I loved science fiction, and this was science fiction becoming science fact before my eyes. It was a case of discoveries pointing out just how much we didn’t know. It was the enigma, the hidden history, the puzzle which expands as more is revealed, in a world we could barely touch that held me. I was fascinated by all that was being revealed and our efforts to discover more.

My exhibition ‘Patrick Moore or Less’ (couldn’t resist the title) was a show of paintings and prints. I have no record of the paintings and these few images of some of the prints are poor quality due to the condition of the aged slides. 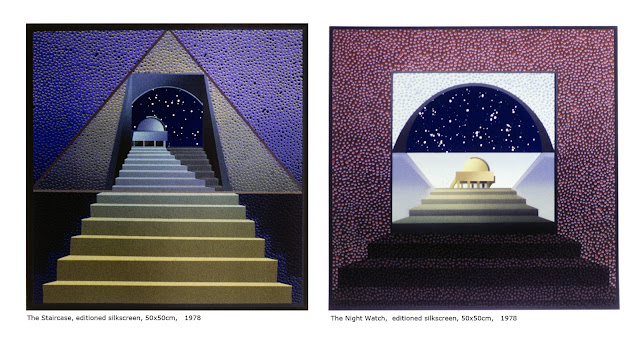 The preview was memorable since all the food was blue likewise the wine. Quiche looks very odd when its ultramarine as does bread, but    blue cheese straws still taste of cheese if you close your eyes.There is no food that is naturally blue, even blueberries are actually purple. People played the game at the preview and tried the scary food, it was a success. I subsequently heard however, that one fellow who drank too much wine was sick on the tube…..and it was blue.

Posted by Anita Ford artworks at 23:20