In 1979 I was invited to participate in a project whereby 10 British artists would spend time in Israel, first in Jerusalem, then touring the country and thereafter spread individually around the land, mostly in kibbutzim. The instigator and organizer of the project was Henene Marks who called the enterprise ‘Israel Observed’. The participating artists were myself, Derrick Greaves,Phillip Hicks, Donald Hamilton Fraser, Philip Sutton, Anthony Eyton, Adrian Berg, David Smith, Lawrence Preece and Brian Yale. The only female artist among the hard core of British painting at that time, I quite wondered what I was doing there.

The experience was privileged in that Helene had created the opportunities for us to access places and situations which would otherwise have been denied us, she opened doors. The kibbutz specified for my stay was Kibbutz Hasolelim, which was not a desert location which was my preference, but a rather lush part of the country not far from Nazareth, so at my request, after a few days I was offered a place in Kibbutz Revivim in the Negev desert, a gritty outpost just south of Be’er Sheva which suited me well after the star treatment we had been receiving. They hadn’t been primed to receive a special guest and I was happily left to my own devices to do things like visiting the market in Be’er Sheva , draw in the desert and get arrested for pointing my camera in the wrong place in Eilat. Fortunately my 'visiting artist' status sorted that one out.

It was on the journey south to Eilat that I saw the monuments in the desert. They were made of old tanks and artillery which at some point had come to grief in one of the wars. They weren’t in a Negev sculpture park (there is one now and from photos I think it may contain appropriate work). These works had a strong 70’s art feel to them and had very little to do with the desert or the tanks or the poor people who were in the tanks. They were just wrongly conceived, abstract art in the desert, and I kept coming across them. Maybe it was an individual with a hobby. There was no inscription on the one I inspected. Are they still there? I don’t know. 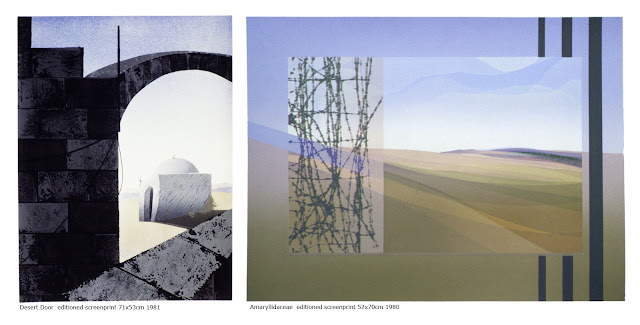 The exhibition ‘Israel Observed’ opened first in Jerusalem at The Israel Museum December 1980, followed by The Mall Galleries in London and finally the Royal Northern College of Music in Manchester in1981.
Posted by Anita Ford artworks at 22:45