Sailing. I never really wanted to become a sailor. I don't like being wet or becoming cold. I like travelling on trains, and planes, and buses. Boats are windy and wet and can be dangerous in nasty weather, so when my partner Alfred said he was going to sell his studio and buy one I was not overjoyed. It was 2001, the year of 9/11 after which the stock market slumped, and for a while people did not buy very much art. I had a choice of learning to sail and becoming crew, or stocking shelves in a supermarket. Not surprisingly I chose sailing, and this choice changed my life for 8 years. From May until October, Alfred and I sailed on our 32 ft (9.65metres) Vancouver cutter and she gave me a taste of the gipsy life.

We were a slow boat. We sailed round the coast of France, going down every navigable river. We crossed the Bay of Biscay and looked up at the sea and then down at the sea while riding the swell. I have seen the diamonds of phosphorescence in the spume of breaking Biscay waves and have seen white shapes like torpedoes moving in a black sea of night time, leaving trails of jewels in their wake and realised that black dolphins had turned into white spectres and were chaperoning us on our way. I have shivered in the freezing fog of Northern Spain and looked intently into whiteness. Portugal gave us the Trade winds, the stomach churning Atlantic swell and the spectacular sunrise as we sailed round Cape St Vincent.

The winter months, October to May, were spent in my studio, working mainly on hand finished silkscreen monoprints, a mix of print and paint. Not surprisingly the work connected with my new life and was about the sea, the wind and the sky and a journey of the senses. It was about the silver wake that we left in the water and about fishing. Unbelievably, I became a fisher woman. I trolled a line when we sailed, and had a lobster pot for when we anchored, and I had nets. I spent time looking into the water when we were at anchor and I would see little fish. I would watch them swimming in circles, swimming in tight groups, scattering. Little flashes of colour. I would watch the light rolling on the surface of the water. I would lower my nets near the rocks and they would become part of the watery world, moving with the current.

A graphic language evolved which allowed me to compose works connected to physical as well as visual sensations.  Thus the wind and the wave and the swell of the sea and the movement of the fish and the line from the boat formed a rhythm, a connection, and I didn't mind if wind translated into sea and waves become glimpses of land. The constant interaction of the elements became as one. And of course, there was the colour. Veils of shifting colour. Intense depths of colour. I had an advantage in that I could use the medium of screen print to chase after that colour. I could use layer upon layer of transparent ink to build up the depth and shifting nature of the hues. I could build colour with a luminosity that would be hard to achieve in paint, though paint was used for the detail. The paint is the narrator in the story of these monoprints, the colour is the essence.
We brought the boat back to England in 2009. She was sold in 2010. 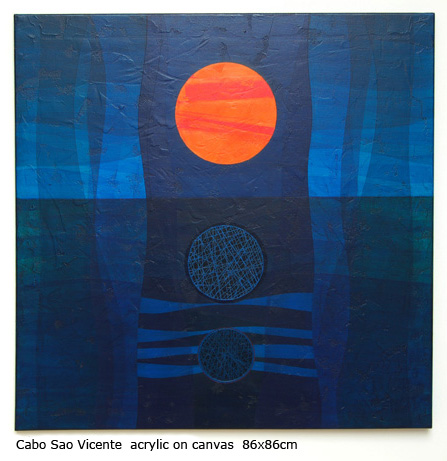 Works based on Flamenco music - Cadiz 2007